R1 Streetfighter - What'll She Do Mister?

Considering the old tyres, this bike impresses immediately. Admittedly a little bit wary on roundabouts because the tyres are as hard as wood - but as they clean up a little, it starts to inspire a little bit more confidence. (They will get changed for Rosso II's soon, I just wanted to make sure everything else was going to hold together before lashing out on new boots.)

Suspension is nice, sublime, stiff but supple, and doesn't pound you like the Bandit or older bikes. Old, conventional forks don't caress you in the slightest, they can leave you feeling tired and drained after a few hours. Modern (we're talking twenty-year-old modern) forks can deal with the shit underneath, and leave you feeling pretty bloody rested in fairness.

A massive difference when compared to a frame with some flex. And with the ProTaper bars, you're pulled forward enough to be in a slightly racer-like position, which is much more comfortable for me than sitting dead upright. This oozes quality, and you can feel how capable a bike like this is straight away. If it was the faired bike you would expect it, but the handlebars make you think differently.

Now the engine feels harsh at lower RPM (wear/issues?), but as the power winds on, oh so nicely, it smoothes out. In any gear, a quick blast up to the ton is a walk in the park, like any sportsbike should be. I think this is a much better hooligan tool than the fully-faired bike, and I look forward to getting a few lessons.

I've not done enough miles yet...

I'll be back with more soon, but I really like it.  It's quick, and it wheelies much too readily when you give it large. Yeah, this will be a fun bike. It inspires enough confidence to let you know that it will look after you whatever happens on the road, but is going to throw your bollocks in a bush if you start taking the piss.

On that note, here's a video of it sat still, where it can't do any harm.

Tidying up the wiring...

So far, the most painful part while knocking up the streetfighter has been the wiring or, more importantly, where to hide it. While also making it look tidy and functional. Where the manufacturers have loads of room within a fairing to put everything neatly, we need to move it somewhere else.

Traditionally, the headlamp shell would hold a fair section of wiring, but my LED light is pretty chunky and I'm guessing it's going to run quite hot with the huge heatsink on the back of it - I'll keep an eye on that.

There seems to be a fair bit of room under the airbox (above the engine) so I'm putting what I can in there. I'm also moving two relays under the seat along with the fusebox, purely for ease of access. The fan relay can stay under the airbox. I'll keep the headlamp fairing loom intact with all plugs so it can be put back to standard at a later date. 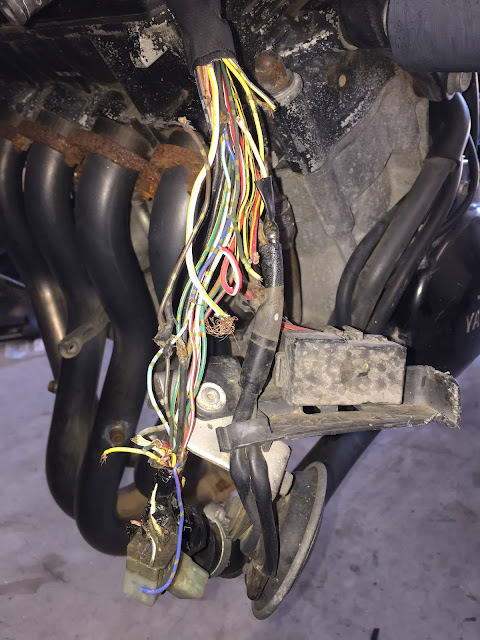 Finding a secondhand tail for the R1 was becoming a pain. Cheap enough in the States, rocking horse shit out in Oz. I decided to give repairing it a go. It was cracked in several places, missing a chunk of plastic just under the seat, and both mounting brackets were broken off and missing. Not a good start, but not impossible.

I'm not a huge fan of plastic welding on fairings — I haven't come across a really strong weld yet — but am open to it if someone can prove the join is stronger than the original section. I am going to superglue the cracks shut, then fibreglass behind them. Yes, fibreglass is messy, but extremely strong and durable. With a light skim of filler, I'm hoping to get away with it.

The pointy bit under the seat will have to built up first in fibreglass, then shaped with filler. I consider this to be skill-building, and I need the practise with filler anyway. 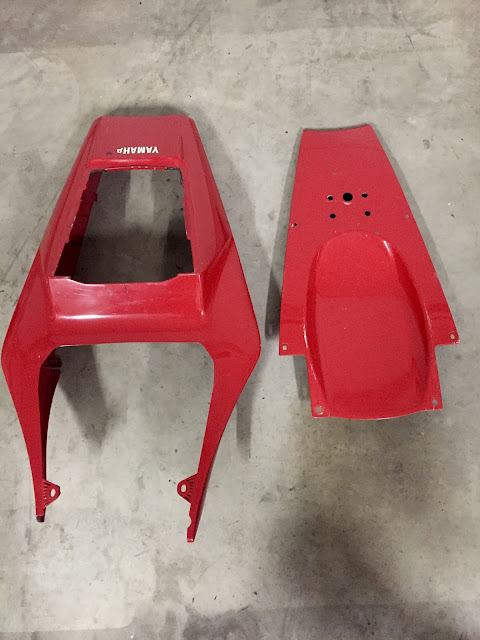 I love a bargain... or punishment!

Gumtree and Marketplace are taking up my life. Both sites are out of control! Where commonsense once led the way, I keep asking:

1) Do I need another project? No, I have too many, walk away now.

2) Do I need another project? Of course, one more wouldn't hurt.

After all, I could sell something to make more room...

I've always wanted the genuine sportsbike version, with all the proper kit from the period - suspension, brakes etc. - but never felt like ripping the fairing off a perfectly good bike. So I kept my eye out for something that maybe didn't matter. Something that hadn't been looked after in the first place and either needed new fairings, or a new look altogether.

So what is it about the older sportsbikes?

They're old school cool, and aggressive. Making good power, proper suspension, with handlebars and no fairing. What's not to like? 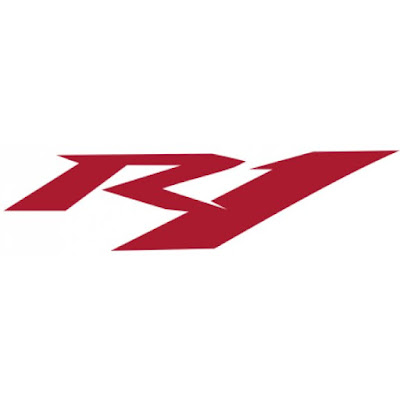 This is just a small post to say that i finally found a brand new seat for the GS550!

A legend in Germany had one for sale on eBay and it arrived recently, looking pretty bloody good too!

I ordered new hinge pins and, after years of having to make aftermarket parts fit, was ecstatic to find it just went on and that was it. No adjustments, no cutting or trimming, it just fitted perfectly, on a forty-year-old bike.

To find a seat pan like that is the holy grail. The trims, the strap. WOW! 😍 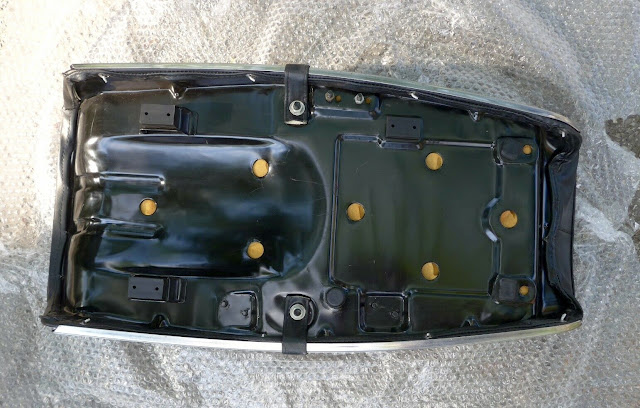 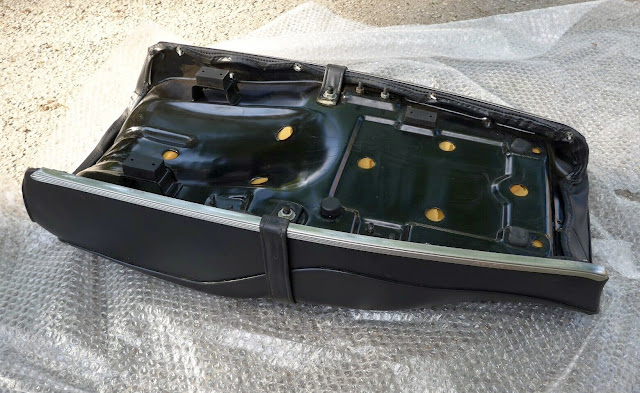 So nice, and unusual nowadays, to have the original design on the cover. 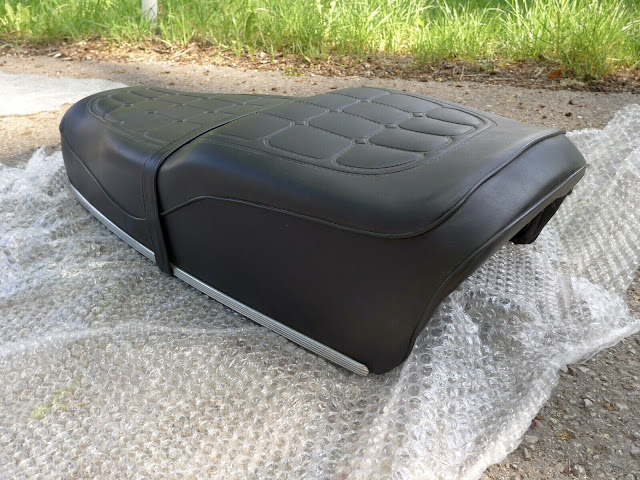 I know it's only a seat, but I've been looking for a good used one for bloody ages. To find a new one blew me away! 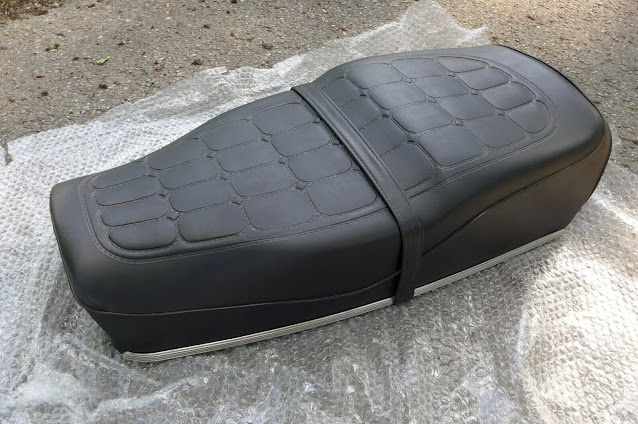 And it looks amazing! 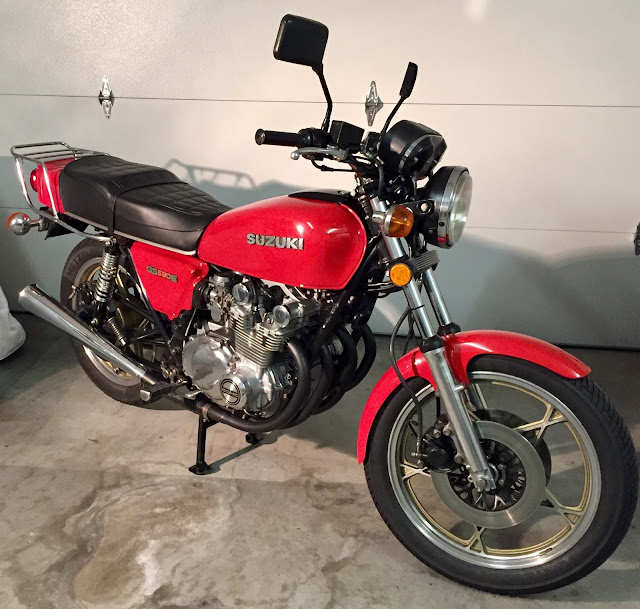 And what a difference to the way it rides!
The comfort from this seat is just unreal compared to what was on here before. I had no idea how much the seat forms part of the suspension before, keeping you isolated from the pounding of the road. It now feels like you could cover massive distances in a day. I'm so impressed with it.
And being that much thicker than the old one, my knees are no longer so bent up either. In all those years of riding, I've only ever had one new seat before and that was on the BSA in the nineties. It'll be much higher on my list of priorities for the old bikes in the future. 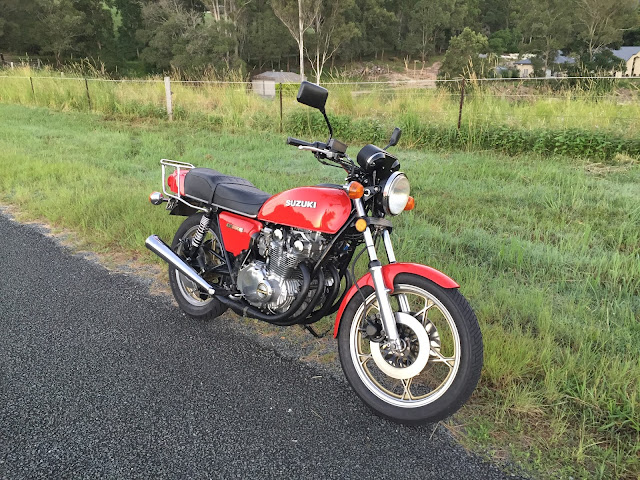 As anyone who has followed this blog will know, the engine out of the GS550E has been stripped completely. And, obviously, this was the ideal time to do a simple check on the starter clutch. And I full intended to, had I had the correct flywheel puller. A simple M14 x 1.5mm bolt is all it needs...

I'd already bought a pretty extensive universal puller/slide hammer with all sorts of adaptors, but none of them being a basic M14 x 1.5mm bolt. Anyway, I ignored it, and refitted the crank with flywheel still attached, not realising what could happen behind the flywheel.

And there it is, flywheel/rotor with starter clutch and gear bolted up behind it. 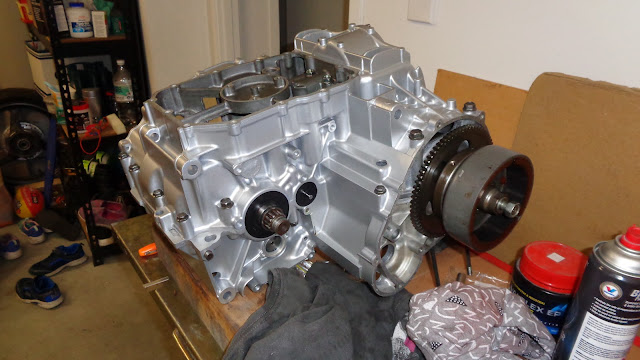 There's a few common places that annoying rattles can resonate from on ye olde GS. One of them being the clutch.

It's a heavy unit to be spinning around on the big needle roller bearing and you will always see and feel the [normal] movement when you get hold of the clutch basket. Considering that the huge helical gear around the outside of it is being driven by the crank itself, movement isn't what you want. That sort of freeplay doesn't really matter, for instance, if the clutch is being driven by chain or belt as there is more flex. Gears don't exactly flex, but they will wear.

On top of this, there is a gear sat behind it, driven by the basket, which then drives the oil pump. A lot going on for something that only has one bearing.

Now a couple of the intelligent folks at GSResources forum removed some of the play by machining a little off the bearing hub that runs on the inside of the needle roller bearing. In effect, this removes a little of the end float and holds the basket at the angle it was designed to run. Thereby keeping the gears at the correct angle, and reducing some of the noise inside. Sounds good huh? 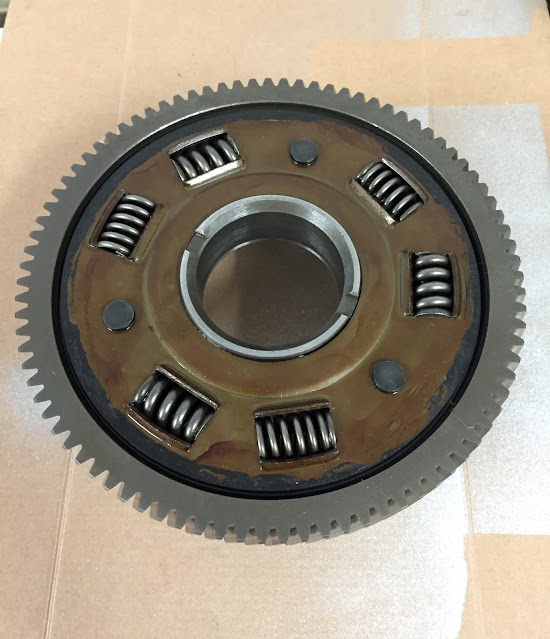 That's the back of the clutch basket. The large gear is driven by the crankshaft. The two slots in the back of the clutch centre drive the gear that, in turn, drives the oil pump. The springs you can see are for cushioning take up of drive as you let the clutch out to pull away etc. These sag slightly with age and, ideally, need replacing because they start to rattle. Or, as I was about to do, you can shim them with washers to quieten them down.
So this unit has a few jobs to do. Probably best that it spins as it should instead of flopping under its own weight...
Read more »
Posted by Biketech7 at 7:16 AM No comments: 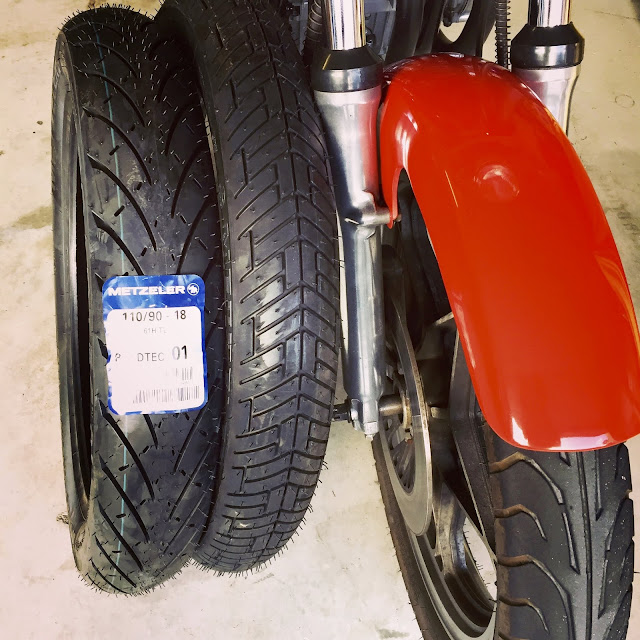